Another Day, Another Bereavement Group

I went and did it. I joined another bereavement group. I know. I know. After reading my previous post "I Hated Everyone In My Bereavement Group" even a really dumb person would figure I was done with group grieving and my plan was to go back to feeling sorry for myself in private.

This was true until I got a call from Linda my future new group leader. Someone had given her my name and apparently that someone had failed to mention that I was an immature trouble maker who will make fun of everyone in the group and then write about it on my blog.

Linda voice sounded so soothing over the phone and I was practically sucking my thumb as I told her it's approaching six months since Jimmy's gone and that I'm over whelmed by loneliness and paperwork and some days I'm not sure which comes first.

She told me I was a 'perfect candidate' for a 'group experience' and I guess
I was so flattered to be thought of as 'perfect' for anything I found myself saying "Yes! Yes! Sign me up!" like I was volunteering to bring cupcakes to a bake sale.

So, this past Tuesday afternoon was my first group. I got stuck joining an afternoon group from 2:15-4:15 because I had tickets to see Barbra Streisand the first Monday night of Linda's evening group. By the way, yes, as reported, Barbra did tell a heckler to "Shut the f%#k up." That was my favorite part, actually.

Linda warned me that afternoon groups are generally older people since they are retired and don't drive at night. She said the important thing is that we are all going through the same time period of grief - anywhere from 3 months to a year. Apparently, Jimmy died right on time.

More about THE GROUP when I return...must go babysit for Skylar, my little granddaughter. Isn't she beautiful? All I have to do is look at her and I feel blessed. 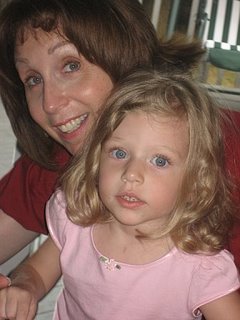