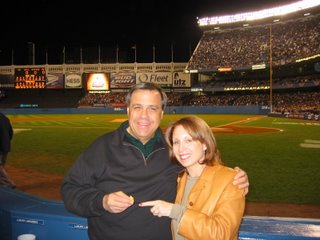 At Yankee Stadium - Jimmy holding 'the duck' and me.

Each season brings it's own memories. This year's World Series between the St. Louis Cardinals and the Detroit Tigers made me react as I do every year...."Who cares?"

True, I'm not a baseball fan, but even New Yorkers who ARE baseball fans had zero enthusiasm this year, too. If a New York team’s not in it we’re not into it. Jimmy was a Yankee fan and I'll bet he wouldn't have even watched.

Seeing glimpses of the World Series on my way to another channel and closing the paper on the Sports page did bring back the memory of game two of the Subway Series in 2000, though.

I was sitting next to my husband in a seat he could have scalped for big bucks or given to one of his begging buddies. I felt unworthy.

“I know you don’t care about the game, but if I come home and tell you I saw celebrities you’ll kill me!” he said.

When Jimmy died this Spring so many fellow Yankee fans told me that his antics at the seats were more fun to watch than the game. I nodded remembering my first game with the man they called “The Duckman.”

Yankee Stadium was vibrating inside and out. It was the first time two New York teams faced off since the Yankees beat the Brooklyn Dodgers in the 1956 World Series. Even I could see this was a big deal and it would draw a Kodak crowd.

From the second we parked our car in the lot for season holders and ball players I was on high alert for a celebrity citing. Famous people start and end at this point and I was ready for the fake bump in, a little system I invented, but never had the nerve to do. Basically, you inch towards a celebrity pretending not know it’s them and then stumble into them. This forces them to say “That’s okay” to your “I’m sorry” which qualifies as a ‘conversation.’

Jimmy’s seats were the legend seats, first row behind the blue wall, with an incredible view of third base straight ahead if you want to see the players run home or an even greater view of the Saturday Night Live seats to the right, if you wanted to see what Jack Nicholson smears on his hot dog. Guess which way I faced the entire game?

Jimmy’s loud heckling voice had been known to rattle the opposing team as they warm up just a few feet from us and because he was funny he got the crowd laughing and hooting along with him. At crucial games he brought out ‘the duck’ a tiny (one inch high) yellow rubber duckie. He waited until the Yanks really needed help and then he’d stand and show the fans his good luck duck, but also as he put it, “I want to show the duck the crowd.”

We never named the duck. He was always simply, ‘the duck’ and superstitious fans near ‘the seats’ would yell to Jimmy “We need the duck!” Jimmy told me once, an employee of Yankee Stadium came by and with a straight face said, “Mrs.Torre would appreciate it if you bring out the duck now.” I never believed him.

This day we sat near P. Diddy (then known as Puff Daddy) who sat next to the Reverend Jesse Jackson. Jimmy yelled over,“The two best rappers in New York!” They smiled and waved and I’m sure I heard the Reverend say, “That’s The Duckman.”

Penny Marshall, a huge Yankee fan, was nearby, too. She posed for a photo with me and as she whined about the score Jimmy leaned over and used Tom Hanks line from her movie “A League of Her Own”, “There’s no crying in baseball.” She laughed. Jimmy made Penny Marshall laugh. Then she said, “Yeah, I knew I should have cut that line.”

My husband was having a conversation with a celebrity and he didn’t even have to do the fake bump in. Suddenly, I was loving baseball. I had no idea the game was so much fun.

The best was yet to come, though. The game was over and the Yankees had won it 3-1. People in all variations of Yankee and Mets wear were bopping out of the stadium to the piped in Frank Sinatra’s “New York, New York.” The parking lot was a maze of cars, vans and limos and one frustrated policeman was attempting to direct the traffic.

Jimmy jumped out of the car and ran over to help him. As I rolled down the window to yell “What are you doing?” I saw Paul McCartney hop out of his limo and heard him say in that adorable English accent, “I’m going to help the big guy.”

There they stood side by side, my husband and my favorite Beatle, waving their arms and getting the cars moving. I watched Adam Sandler run over to shake Paul’s hand. Because Jimmy seemed to be Paul’s pal he shook his hand, too. Bill Murray appeared and did the same.

My mouth hung open as Paul McCartney strolled back to his limo, slapped five with my Jimmy, and said to him,“I think it was the duck.”

I went home with a celebrity that day and of course he got lucky that night. These days I keep the duck on my night table next to my bed and the night when David Eckstein of the St.Louis Cardinals, (a bird team a duck may prefer) drove in the game winning double I held the duck up to Jimmy and told him in Paul's English accent, “I think it was the duck.”
at 11:13 AM