Why The Long Face? 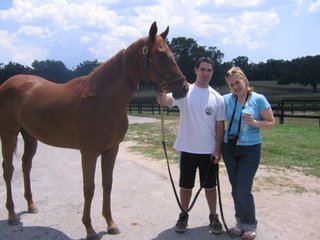 Jackie and Doug with 'Skypa' our future triple crown winner.

My father-in-law would bet on two cockroaches crawling up a wall. Anything for action. Jimmy inherited the gambling 'bug' and after our honeymoon in Las Vegas
I caught it, too.

Big difference, though. I can spend hours in a casino but horse racing is stupid. In between races it's just twenty minutes of waiting around with nothing to do. Oh, right. I could 'handicap' like Jimmy did - calculate past races, figure in if the jockey is having a good day, blah, blah, blah.

My method requires none of that. I choose a horse who has a cute name. Sometimes he catches my eye to psychically send me a message.

Jimmy inherited that obsession from his father, too. Charlie owned a few horses and loved them so much that growing up he told Jimmy and his brothers,

"I fell for your mother because she had ankles like a filly."

When we started dating I would check my ankles. Do I have ankles like a horse, too? Before long it was clear that Jimmy liked me from the waist up...whoe... since my children are reading - enough said.

Over the years we had several financial ups and downs. When we were up Jimmy bought horses. This quickly brought us down again. He would shake his head and say again and again,

Really? I hadn't noticed. In 1990, we actually had "Country Day" entered in the 116th Kentucky Derby - I have to admit that was a thrill - until the evening before the race when Country Day took a bad step and had to be scratched from the race.

Derby week in Kentucky is magical when you're an owner. Our family was treated like royalty until the foot incident. The next morning we were already old news with nothing to show for it but a lame horse and an printed program to prove we could have been contenders.

It's silly to list all of the horse disappointments and disasters, but there were plenty - To me, horses = disappointments. And, horse people seem to make excuses for everything.

"My horse would have won if it wasn't for those other two who passed him." Duh.

Today, however, I am the sort of proud owner of James Scibelli Racing Stables, Inc. I inherited four two year olds - a hobby/business that I groaned and moaned about all these years. Each month I pay exorbitant fees to trainers and vets. My hand wobbles writing these checks as I realize these freakin' horses get more new shoes every few weeks than I get in a year. They have four feet and they're running around (literally) a lot more than I am, but still...


Why don't I just sell them? Because I promised my son Doug who loves the track and spent so many memorable moments with his Dad in the paddock and actually in a few winner circle photos, too that we will play out his father's dream. One of these four two year olds that we're left with may be 'the one.' (at least champion enough to earn his keep and pay for his own shoes)

So now that Doug and I are 'partners' he explained a few papers I've found and phone calls I've gotten these past months. He confessed that

Nice. Some widows find jewelry meant for another woman or love letters - I find a half a horse here and a quarter of a horse there.

The Saturday after Thanksgiving, November 25th Skypa, the first of our two year olds will be running his first race at Aqueduct. Jimmy had named him Skypa because his father was Stravinsky and his mother was Garopaba. It fit perfectly because 'Sky' was for Skylar our granddaughter and she called him 'Pa.'

I'm so much more excited about this race than I ever could have imagined. I wish I could have had this enthusism for racing to share with Jimmy. I know he was hurt that I wasn't one of the wives jumping and hugging their husbands as they watched their horse glide over the finish line.

Here I am, though, caught up with the possibility that as strange as it sounds just maybe in death Jimmy's luck may have changed. Friends say he will be there with us at the track. Just in case his bad luck lingers I hope he stays away until the outcome and meets us in the winner's circle.
at 12:08 PM