Jean, my bereavement shrink told me I'm a very honest woman. She said it like she doesn't come accross one often and that is just weird considering every other session she throws her hands up in the air and announces, "I've treated thousands of people."

Just in case I might mistake this 70 something for a new kid on the block, she repeats, "Not hundreds, but thousands."

I get it. I get it. Each day she sits in her high back leather chair with her feet up on the ottoman, holding her huge mug of coffee (I'm assuming) and tells another poor widow or widower or worse how everyone experiences grief differently.

I object. I doubt there are "thousands" of variations on the death theme. I doubt it a lot. She seems to take great pleasure repeating my questions.

"Why do YOU think?" she responds. AHH...can I kill her and get away with it? I wonder.

"Why does it bother me so much that he never cleaned out the garage? Should that matter now? Damn. I'm a terrible person." I say, slumping further down on the couch.

Again with the "Why do YOU think?" But, something shifts and I sit up and tell her that if he had cleaned out the garage I wouldn't have to see the sides to Doug's old bunkbed, the gray lacquer cradenza from two houses ago and the stupid outdoor cushions that fit chairs that are long gone. I'm stuck seeing them through only my eyes and there's no one here to say,

"Oh, God, remember when Louis the decorator made us buy that?"

She has that 'It looks like we're getting somewhere look.' I furiously tell her that I'm not going to ask her why I'm focusing on the bad stuff. I already know. She bates me with a "Why?"

"Because there was so much of it!" I say, feeling PMSY even though I haven't gotten my period in five years. She puts down her coffee mug, takes her feet off the ottoman and leans towards me, "No", she says softly, "You're trying to not miss him so much."

Living In a Refrigerator

Jimmy hated the winter. He was a big guy so it was always surprising to everyone how quickly he felt the cold.

"This wind goes right through me. Why do we live here? It's like living in a refrigerator" he'd growl and then throw in a couple of 'brrs' and shiver for extra drama.

Naturally, I called him a baby and if snow was convenient I'd scoop it up and throw it at him. If this is painting a picture of a playful snowball fight ensuing and ending in a major sex scene by the fire, it didn't go that way. It never went that way.

Snow to Jimmy an anti-aphrodisiac. In fact, it was probably the only thing that didn't turn him on. (although he did appreciate the hot chocolate)

This morning as I looked out at the driveway that was transformed to a skating rink I thought I heard Jimmy's voice, "HA!"

I had to be in the city by noon for a luncheon for a
Gotham Networking luncheon at the Friars Club. My car looked like an igloo. Again, I heard "HA!"

"HA! Yourself" I said to a nearby photo. "It's invigorating and fun and scrapping off the car will be a challenge!"

Finding and then putting on my snow boots on was the first challenge. Locking the door behind me was another. The lock had froze and my key wouldn't slip in. I went back into the house and turned on burning hot water, poured it into a paper cup, then "ouch!" doubled the paper cup.

Splashing burning hot water on the lock worked and I smirked as I turned the key. As I inched like Tim Conway on the old Carol Burnett Show down the steps towards my car I slipped and hung onto the mailbox. Then, I realized I left the scrapper in the house and had steady myself and climb up again. The lock was frozen again. I stood outside with no hot water.

Brainstorm: I'll go in through the garage. I gingerly got down the steps and slid across the driveway to the garage door. I put the code in and open sesame - the garage lifted up and I went in - to the garage, but the door to the house was locked.

The 'fun' part was pretty much over and 'invigorating' had turned to freakin' freezing. I felt like a contestant on Survivor, except for the fact I was decked out in a cute little mink jacket, my neighbors were 20 feet away and it had only been 15 minutes.

As I ice-skated over to my trunk where I prayed I kept a scrapper I slipped again and this time grabbed hold of a skinny tree on the side of the driveway.

All these near misses made me think of what could have happened. If I had fallen and landed on my head I may have lived and been a burden to my children or choice number two I could have smacked my head even harder and been reunited with Jimmy.

Another "HA" somewhere inside my head gave me the wherewithall to balance myself. I would never hear the end of it from him if living in a refrigerator killed me.

I'm beginning to attempt to use the word 'died.' Jean, my shrink says that 'passed away' is a cop out. She says that people fumble with the word 'die' to keep their loved one present.

She insists, "Jimmy didn't pass away. He died." Is she reminding me?

Her tone is biting and too aggressive for me. I'm feeling fragile. I've taken a few steps back and she needs to take it easy with me. Shouldn't she see this? Is this tough love or is she trying out new comedy material on me?

She doesn't stop. "If he passed away where did he go?" She waves her hands and as they float in the air she hesitates like she's waiting for the audience to get the joke.

The cackling of her imagined fans 'dies' down and she continues. "I also hear '"I lost my husband." ' I tell my clients. "No. He's not lost. He knows exactly where he is."

I'm squirming and becoming teary yet also finding this oddly funny. This sounds like a routine
that Jackie Mason might do.

When they told me Jimmy had ____ in my head I knew that meant he was ___. I never expected my husband to come back, walk in the door as so many people who have lost loved ones express.

Superbowl at our house has been a tradition long before HD TV and flat screens and huge screens. For 30 years at least a dozen guys would gather around our 27" televison and later our 35" and last year, Jimmy's pride and joy, a 60" screen.

The grid for the pool was posted on the kitchen wall and nearby there were wings and cannoli's and Fanny's meatballs, food enough to feed the entire NFL.

Jimmy was the loudest among the loud and the funniest among the funny. He would fall to his knees and curse at the coach or heckle a player rooting like he was at a live game. Women were not allowed so I was never there, but I know this.

It always puzzled me that Jimmy was so unbending about the 'no woman' policy. He was normally extremely bendable. A brat like me could never be married to him if he wasn't.

This day was totally testosterone. Poor, displaced me, would have to find someplace to go. It wasn't easy in the early years when Jackie and Dougie were little. Superbowl games are always in the evening into the night.

After several years I saw it was senseless to argue. He did the shopping and the cleanup and before long Doug was one of the boys along with his friends and it was just Jackie and me seeking a quiet haven without a tv.

Me, being me would use it to my advantage all the rest of the year. Whenever I wanted him to go someplace with me or if I wanted to go with just my girl friends without him I would pull out the Superbowl card. It usually worked throughout the rest of the Winter and into the Spring and then again mid-January as Superbowl Sunday was around the corner once again.

The last 10 years it was a non-issue. I would go out to dinner with my cousin Marion and other friends and see a movie. I still used it against him, though. That was almost as much a tradition as the Superbowl party itself. It was our dance.

Today, it wasn't me who was displaced, but Doug and all of his and Jimmy's buddies. Everyone scattered. For Doug, Superbowl without his father must have felt like this past Christmas all over again. He went to a sports bar in the city and some friends joined him. Others stayed home with their families.

And, for the first time in 30 years I could have stayed home. It was quiet, too quiet. I went a few towns over to Vera's house, our friend from Junior High School who I've reconnected with.
She and her husband Jeff had a huge Superbowl bash...both men and women. There was enough food to feed the entire NFL. Missing were Fanny's meatballs.

I won the pool twice and I talked with old high school friends. It was comfortable. Back at home there were no hefty bags to be thrown out and no lingering food smells or friends with hoarse voices.

Tradition is a wonderful way to stay close, remain connected and make memories, but when the main link of the chain breaks, it's over. Jimmy's Superbowl parties are now in their own Hall of Fame we'll always refer to as 'the good old days.'
at 11:30 PM No comments:

Photos From Aruba - Captions By Sky 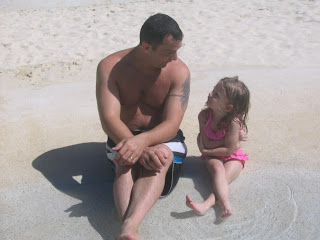 "Hey, is Daddy copying me?" 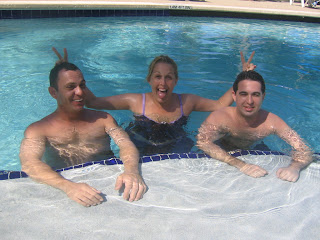 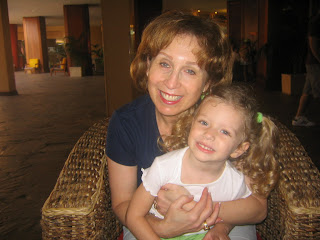 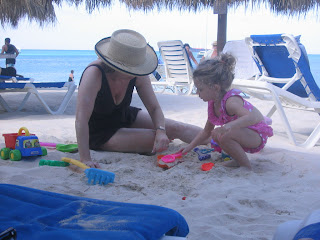 "That's my Grandma under that hat." 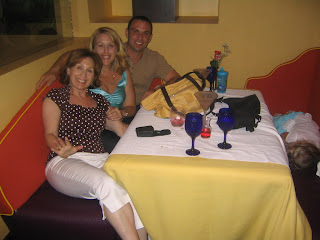 "I don't remember this restaurant." 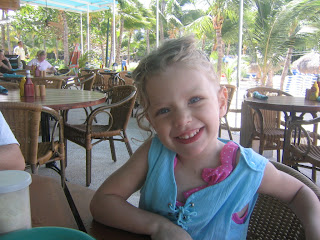 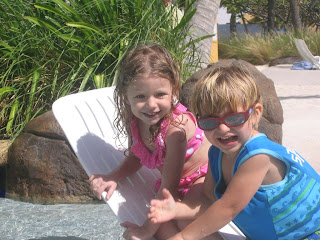 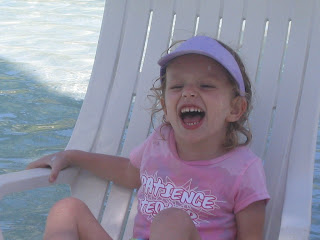 "I have a very funny family!" 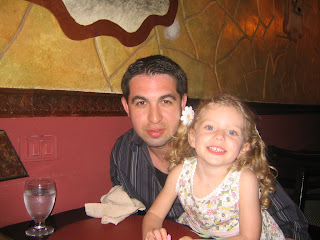 "Is Uncle Doug wearing my daisy?" 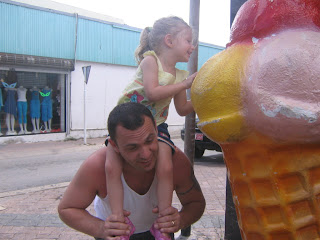 "Wow...The ice-cream cones are much bigger in Aruba!" 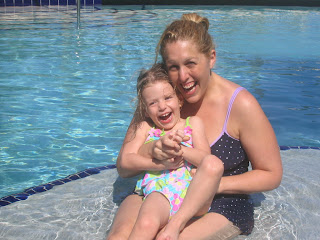