The Measure of a Year

April 13th came and went. Tomorrow, April 18th, was the date of Jimmy's funeral. We said good-bye that day and it began the year that just passed.

April 18th was also our "Date-a-versary." Our first official date was April 18, 1968. Jimmy was eighteen and I was seventeen. We played Pitch and Putt, nine holes of golf. It was boring, but I told Jimmy it was great.

In those days most girls pretended to be into football or cars or all kinds of sex, or sex at all when they weren't. Soon I stopped pretending. I didn't want to have to play golf again. Or have the burden to remember to act excited about Ringo when I was really into Paul.

I remember I wore yellow. Lots of yellow to the golf course. I had yellow opaque tights and yellow hot pants, a silky yellow top and later, years later Jimmy told me how stupid I looked.

"It was like looking at the sun," he said. "the sun with big tits."

We used to go to the airport to watch the planes take off. I don't remember why, but we did. It was free. I guess that's why. We'd sit on the log in front of Carvel eating our ice-cream and I made fun of Jimmy because he always had vanilla in a cup with peaches. "That's a desert for a little old Italian man" I'd tease.

Friends and family tell me Jimmy would be proud of me now. They say this past year I've handled myself with dignity and courage. I don't know what that means, really.
Each day kind of fell into the next and decisions had to be made.

Jimmy's limo business is still up in the air, but I'm less frantic and more at ease about the outcome. I learned what a receivable is. I've attended business meetings and been on conference calls and sometimes I actually understand what is being said. Sometimes I even say something smart.

I sold two cars, a couple of horses, bought a new oven and redid the basement to be a playroom for Sky. We took a family trip to Aruba. These are some tangible things that measure the year.

The intangible is the love and support from my kids and from my friends. All have been beyond loving. My children are strong and caring and I try to fill some of their void and lessen a bit of their pain. But, I can't be Papa Bear for them.

I tend to hide away and do my best imitation of a hermit, but then an invitation for dinner draws me out. I'm a sucker for a glass of red wine to start.

I no longer avoid running into people in my neighborhood dreading their looks of pity or shock. I still feel more comfortable with my family and friends who knew and loved Jimmy. I feel safest at home and no, real estate brokers, I'm not selling the house.

I'm not dating. I've had some offers. That began at ten months. I clocked it. It's both flattering and disturbing.

I belong in a category that sets me apart. Widowhood is sad and strange and I miss Jimmy all the time.

Still, I wonder what next year will bring.
at 6:40 PM No comments:

I went to a writer's conference this weekend and although there were conflicting answers by "people in the know" most told me it's fine to keep the blog going even while planning to publish much of this material.

Was that a run on sentence? I guess I should have attended the grammar panel...

When I began this blog I planned to end it when the year ended. I reconsidered that, too. I realized I'm not ready to stop blogging just like I need to hold on to Jimmy's clothes.

Of course, I can afford to be sentimental. I don't need the closet space. 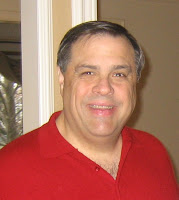 This was in Newsday yesterday and I really should have added "and Jimmy's many many friends who loved him and misses him, too."
at 11:09 PM No comments:

Easter At My House

Last Saturday I sat at my mother-in-law's kitchen table between her and my brother-in-law, Charlie. Every Easter for at least the past 25 years my family has gone to Charlie and his wife Gabie for this holiday.

Here it was the day before Palm Sunday and nothing had been said about Easter. I didn't get an e-mail requesting my famous chocolate pudding pie. Jackie, my daughter didn't get a phone call asking if Skylar eats ham. Nobody sent up a smoke signal to say,

I asked, "Hey, Charlie, what's going on for Easter?"

He pushed his hair back in a nervous gesture. I could tell it was a nervous gesture because his hair was already neatly slicked back. He stuttered something about their good dishes being packed away since they're in the process of selling their house. I didn't catch the last part because he drowned out the end of his sentence with a self concious sip of coffee.

Before I had a chance to respond, "That's fine, but when were you planning on telling me this? Easter morning?" a peculiar conversation began between Charlie and Fanny.

I silently moved my head from Charlie to Fanny, from Fanny to Charlie following their words like the ball in a tennis match.
Finally, I blurted out,

"Well, let's see - if Easter last year was next week Jimmy was in the hospital. And, if it was the week after, he wasn't anymore."

You can imagine the embarrassed groans of "Oh, yeah" from the two of them, Jimmy's brother and mother.

I don't expect everyone to remember, although most of my friends, do. It's kind of like we all expect important events in our lives to hold the same importance to everyone.

So often when I ask my friend what she's wearing to some event she answers,
"I think I'll wear what I wore to Lori's party."
Does she really think I can picture what she was wearing? I don't even remember what I wore.

As I said, we haven't varied the holiday in twenty-five years, so I can't imagine why there would be any confusion, anyway. So much for extended families. The best definition I ever heard of family is:

I mentioned to Doug that Aunt Gabie isn't having Easter this year fully expecting him to shrug and say "Let's skip it." Instead he said, "Then, you have it."

Oh. Okay. Yeah. I guess, I could do that. I love that he expects of me what I don't expect of myself. Last summer he saw a stack of bills I was going to bring to Jimmy's assistant to pay for me. (Rae used to pay all our bills even when Jimmy was alive) Doug said, "You can't pay your own bills?" Since then I have.

Doug is a great combination of a helpful, loyal son but he won't take over. He knows I'm capable and I rise to that. It's working.

Tomorrow we'll be twelve people around the table and one little three year old running around looking for hidden Easter eggs. Tradition continues in it's own new way.
at 9:23 AM No comments: