My Two Cents about Two and a Half Men 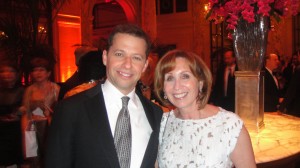 Jon Cryer & Me – June 2011
Like 28 million other viewers, I was eager to see how producer Chuck Lorre handled this season’s first episode of “Two and a Half Men,” knowing Charlie Sheen’s character, Charlie Harper, was killed off and replaced with Ashton Kutcher. For the record, I’ve been a huge fan of the show for all eight seasons. And I can’t say Monday night’s episode wasn’t funny.  It was, opening at the funeral with Alan Harper (Jon Cryer)  trying to give a serious eulogy, and all the women who ‘dated’ Charlie yelling out, “A sad day? Speak for yourself,” or “Charlie was a giver?  Yeah, he gave me herpes.”

Then when his TV mother, Evelyn (Holland Taylor), stood up like Mama Bear to demand they give her son “some respect,” she just couldn’t help the barracuda real estate broker in her from taking over and letting the crowd know she was selling Charlie’s beach house and that the flyers for the Open House were in the back of the room.

Did I laugh?  Sure I did, because there she was staying true to character, even at her son’s funeral.  And that goes along with what I often say about grieving – we’re all still always who we are, and our true selves peek out when we least expect it.  I’m never the one to say “too soon.”In fact, the day of my husband’s funeral, as I was getting dressed I was thrilled to notice I’d lost weight. And later put that moment in Poor Widow Me, and gave it the title, “I Lost My Husband & 3 Pounds.”

I also remember, when sitting in between my son and daughter in the very first row at the funeral, thinking, This is probably the only time in life we don’t want the best seats in the house. But I didn’t whisper that to my kids, or to the line of people who came by to offer their condolences, partly because my life isn’t a sitcom, and mainly because the next moment I was overcome with emotion.

And that’s what I feel was missing from last night’s “Two and a Half Men” episode…genuine emotion. To me it cried out for at least a little hint of reflection, that could have then moved right into something funny. As Alan sat on the couch holding his brother’s ashes, he could’ve spoken a bit longer, and more from the heart, to Charlie, and that would have been the moment. Then the new guy, Walden Schmidt (Ashton Kutcher), could’ve still interrupted, and the ashes still could’ve flown all over, just as they wrote it…grief relief bringing it back to comedy.
I keep thinking now about the episode years ago from “All in the Family,” when Edith Bunker died and Archie went upstairs to their bedroom and saw her slipper under the bed.  He lost it.  It was heartbreaking and yet sweet to see what we viewers really knew all along – that with all his bravado, he truly loved her.
And I’ll bet the Archie Bunker character didn’t lose any fans that day; he probably gained them. But that was the brilliant Norman Lear, and this was Chuck Lorre, who likely, in an attempt to diss Charlie Sheen, ended up compromising his show. That’s how I see it, anyway.
Please click on this YouTube video to see the final minutes from this episode of “All in the Family.”
Would love to hear what you think… www.youtube.com/watch?v=-UKrAYD3zX8
at 10:19 PM No comments:

I don't even know if anyone will come to this blog anymore - who will read this?  I've directed everyone I know to my new website/blog...www.PoorWidowMe.com - and now it also clicks through from www.CarolScibelli.com.  But, will that stop me from talking? Nope...here I go...

As you know, I started this blog just a couple of months after my husband died and here it is almost five and a half years later.  I've moved on - in so many ways.  These days I talk with new widows and I remember feeling those feelings but sometimes it's like I didn't live it...someone else did.

We hold on to what's familiar.  For me, at first it was my marriage and now it's my independence.  My new blog, "Widow Bits" will be a new direction and that feels good. It feels natural.

Thank you for following my 'story' - Some of you were kind enough to let me know, in your own way, that you found something in it that shifted something in you.  That was the best. It never got old to hear.

Welcome to my new blog

This is just a quick “hello” and to say I’m happy you dropped by, and hope you’ll come back often.
Some of you may have followed the blog I began in 2006, just months after my husband died, and I’ve kept it updated, until fairly recently.
Now it’s time to start a new blog for a new site, as much of the content in www.PoorWidowMe.blogspot.com is now in POOR WIDOW ME, my just-released book. So “Widow Bits” is a fresh start.
I’ll be traveling the country the rest of this year, talking to widows and widowers and bereavement groups, and I’ll report back in here what other widows are feeling and experiencing.
I would also love to hear some of YOUR experiences. I’ll include your concerns, funny stories, moments and questions in future blogs, so if you have anything you want to say, or ask, please reach me through the Contact Page, comment space here, or on Facebook.
I also want to let anyone know, who doesn’t already, that Camp Widow, www.CampWidow.org, is branching out to now also have an East Coast gathering, which is scheduled for April 20-22, 2012, at the Myrtle Beach Marriott Resort.
In my next blog I’ll be writing about the August 2011 Camp Widow Conference that was held again in San Diego. Each year it gets better, just like we do…
at 10:20 PM No comments: